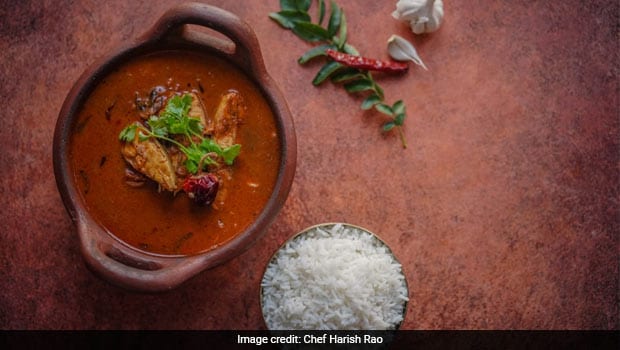 In almost the same way that many Mumbaikars still can’t get themselves to say Mumbai – opting instead for Bombay, many Chennaites still cling to Madras. They will tell you that Madras is an emotion and Chennai is a city. That’s one reason why many things intertwined with the identity of the city – especially among global audiences, continue to retain the Madras prefix. Food is a big part of that identity; it’s why you still find Madras curry powder on supermarket shelves in London and then there’s Madras fish curry.

Many global chefs have come to the city in pursuit of this earthy recipe and have done their bit to popularise this iconic dish. Of course, despite their best intentions there are jarring inconsistencies, like suggesting basmati rice as an accompaniment with this spicy, tangy fish curry. It’s almost like suggesting Kerala matta rice as an accompaniment for Rajma (instead of basmati rice). It’s not just global gourmands, I’ve seen premier restaurants and chefs across India stumble occasionally in their interpretation of Madras fish curry. I’ve had to keep a straight face and be polite when asked about my feedback.

You’re unlikely to hear the term Madras fish curry in Chennai (I can already sense the ‘Madras’ loyalists taking offence). It’s meen (fish) kuzhambu here and there are few dishes that are romanticised in popular culture (especially in Tamil cinema) like this wonderful dish that is truly an explosion of flavours. This is a dish that originates in Chennai’s fishing hamlets that have been here long before the British established modern Madras as we know it in 1639.

I’ve had the opportunity to interact with some home chefs in Chennai whose signature dish is the quintessential Meen kuzhambu. It was wonderful to meet one of these experts at Sea Salt, a Chennai restaurant that promoted sustainable fishing and put simple, local flavours under the spotlight. Chef Harish Rao, (who was involved with this project), has explored some of Chennai’s fishing communities in his search for authentic recipes. He also believes that the term Madras fish curry has been loosely used for almost any fish curry from Tamil Nadu cooked with tamarind and in earthen cooking pots.

There’s more than one way to make a Meen kuzhmabu in Chennai. Here’s one authentic version: