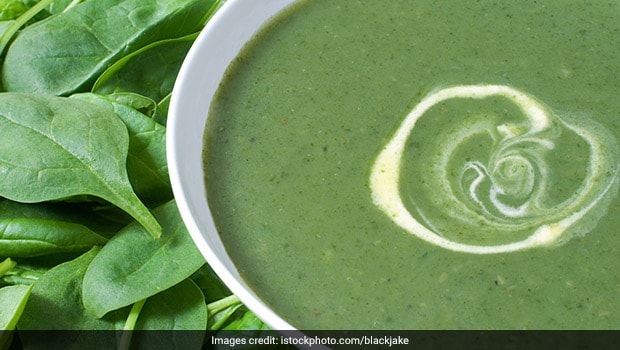 It’s the season of leafy greens and our grocery stores are teeming of various different types of nutritious vegetables. Some of the most common ones abundantly used in Indian kitchens are palak, methi, bathua, mustard greens, radish leaves etc. Be it curries, stuffed parathas or dry mixed vegetables, there are numerous dishes that are made from winter greens. Greens can also be added to salads to lend some seasonal nutrition to your diet. They can also be made into soothing soups that are just perfect for winters. Spinach is widely used as an ingredient in creamy soups that can be enjoyed as meals during winters. We give you some delicious spinach soup recipes that can help you brave the cold outside. But let’s look at the rich nutritional profile of this quintessential winter green.

Spinach is very low in calories. In fact, it is one of the most nutritious negative calorie foods out there. A 100 gram portion of the vegetable provides just 23 calories (as per data by the United States Department of Agriculture). It is extremely rich in vitamins and minerals, most notably beta-carotene (a precursor to Vitamin A), Vitamin B6, Vitamin B9 (folate) and Vitamin K, as well as iron, magnesium and manganese. The leafy green is known to help maintain eye health and improve the health of bones. Spinach is also said to regulate blood pressure and fight inflammation in the body.