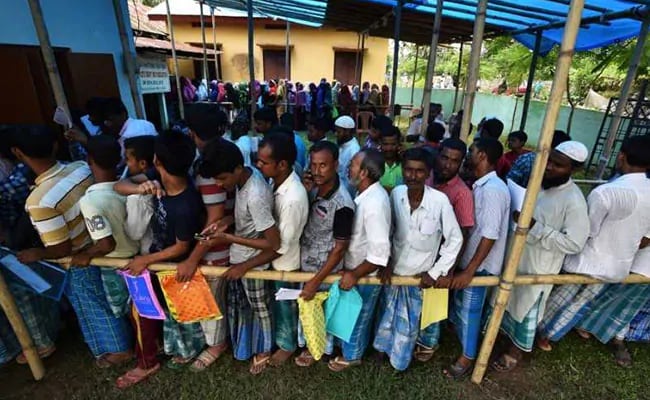 The BJP has said it will update the National Register of Citizens across the country after the exercise is complete in Assam to weed out illegal migrants from Bangladesh.

“NRC is not only for Assam; it is a must for the entire country and we will get this done. We cannot allow the country to be turned into a dharamsala that anyone and everyone can illegally enter and stay forever. We will change this. For Assam, we will look forward to the Supreme Court to ensure that an error-free NRC is published,” Mr Chauhan told reporters at the state BJP headquarters in Guwahati.

Mr Chauhan is on a three-day visit to the north-east for party events. He also backed the Assam government for its decision to release the sensitive draft NRC data in the state assembly on August 1.

“I would not like to react separately, but whatever the government has done, they have thought correctly and then gone forward. BJP is committed to resolving the illegal infiltrators issue in Assam,” Mr Chauhan added.

The opposition Congress has decided to write to the Supreme Court, which is monitoring the NRC exercise, alleging the BJP government has violated the top court’s order and leaked the draft NRC’s district-wise break-up to earn political points.

“When the centre had asked for this data, the Supreme Court denied them saying it’s sensitive. So this is a clear. It’s a contempt of court by the state government, and we will write to the top court for proper action,” Leader of the Opposition in the Assam assembly Debabrata Saikia told NDTV.

A controversy erupted in Assam after the state government released confidential data on Assam’s citizenship drive, giving the district-wise break-up and showing the percentage of those excluded by the NRC. This data had been submitted in a sealed cover to the Supreme Court in August 2018 by NRC coordinator Prateek Hajela.

In an order in September last year, the court had said the “confidential reports” submitted in “sealed covers” should not be made available to anyone because of their “sensitive nature”.

The BJP government had released the data to argue that the NRC is flawed and to press their case for a 20 per cent re-verification of the draft NRC. This demand has been already been rejected by the Supreme Court since the NRC authorities have informed that already 27 per cent  incidental re-verification has been carried out, while settling the claims and objection of the draft NRC that left out about 40 lakh people